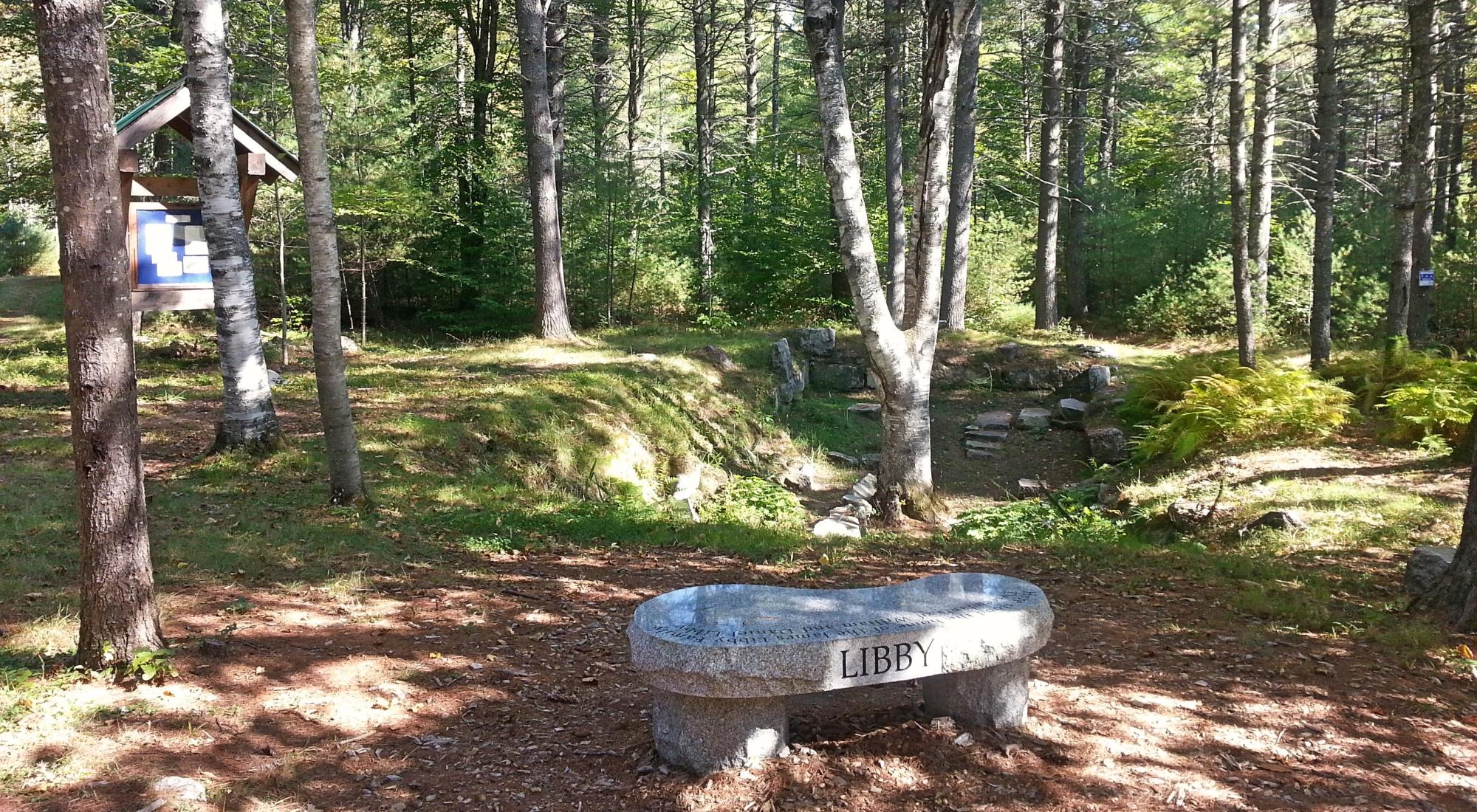 A Trail System is Born

In 1764, the town of Gray (then called “New Boston”) was settled after a failed earlier attempt in the 1740s.  One of the original settlers Daniel Libby became a prominent local citizen and took ownership of all the land west of town to Dry Mills and Little Sebago Lake.  The high hill just west of town became known as “Libby Hill”.

Daniel’s son William, after returning as a prisoner of war in the Revolutionary War began a farm where the recent Hannaford Supermarket is on Route 26.  William had a  son James who in 1816 began a farm at the top of Libby Hill.  Over the next 50 years the hill was cleared of trees and was farmed until abandoned around the civil war.

Descendants of the Daniel Libby family still live in Gray and southern Maine.  John Libby, whom was Daniel’s great-grandfather was the original immigrant for all Libby’s to the U.S..  To learn more about the Libby family history visit the John Libby Family Association genealogy site.

In 1973 the Town of Gray received a donation of 70 acres of land to be used for park and recreation  activities from Sylvia Dow, who was one of these descendants.  This property is located on top of the ridge behind the Gray Middle and High Schools.  This land has had a number of old logging roads that  were used for a variety of activities by a wide range of citizens in Gray.  In August of 1999 the Gray Parks and Recreation department decided to start an ad hoc committee to make a more formal trail system on the property.  The committee started out with a half-dozen Gray residents who were interested in finally developing the recreational area.

By January 2000 the committee had grown to over two dozen interested members and an outline for how the property should be developed was presented to the town council.  The council approved the project and encouraged the committee to “think big” and try to make a first class recreation area.  In February of 2000, the committee obtained a grant from the Maine Forest Service, which has funded nearly 100% of the project.  In June of 2000, a trail designer was hired to make the trail system blend optimally with the contours of the property.  Every Thursday evening during the summer volunteers showed to help clear the initial brush from the newly marked trails.  A formal forest management plan was created and implemented in the fall of 2000.  Volunteers continued to work their way up the hill that sometimes seemed higher than its 480 feet of elevation!  Excavation began in November  for 6 weeks removing stumps and leveling out depressions in the trails.  Between December 2000 and February 2001 the signage and mapping of the trails were finished with the efforts of nearly 100 volunteers and over 2000 hours of volunteer time.  The Libby Hill website  also began operation in February 2001.

The trail system opened with nearly 5 miles of non-motorized trails and 2 miles of the original logging roads that can still be used by motorized vehicles.

In 2002, the Gray Community Endowment (GCE) was formed to promote community projects in Gray.  In 2003, the GCE obtained a donation of 46 additional acres for the Libby Hill Trail from Richard and Wilbert Libbey. This combined with verbal permission from the Mathew Morrill Trust allowed the construction of the Harold Libbey Trail in 2005 and the Outback Trail in 2007 . This brought the total mileage of the trails up to 7 miles.

The GCE in 2008 took ownership of the 29 acre Hancock Property that abuts the middle school permanently giving access to the public to the trails of Libby Hill.  Between 2008 and 2010 the GCE and the Friends of Libby Hill raised $160,000 to pay the mortgage on this parcel.  In November 2009, two new trails, Lynx Trail and the Ghost Trail were added to the trail system.

In 2021, GCE, SAD 15, and Town of Gray entered a MOU (memorandum of understanding) agreement to formalize trail maintenance between landowners.

In 2022, RRCT purchased the Durgin property of 147 acres that adjoins Libby Hill Trail properties. This contained one mile of Libby Hill Trails that had previously only had verbal permission for usage. A new preserve, Thayer Brook Preserve was created to provide permanent conservation of Thayer Brook Marsh and a second access point to the Libby Hill area via 92 Ramsdell Road.

The trails offer a beautiful place to walk, ski, bike, run, walk your dog, or just enjoy nature!  They are available for year-round usage and parking is available at the end of the paved portion of Libby Hill Road.  The main entrance for the trail is not at the  orange gate but starts behind the Middle School.  Trail maps are available on our website, or you can pick one up at Gray Town Office.  Come and explore Libby Hill Forest and discover one of southern Maine’s best outdoor recreation spaces!

Help us with fall clean up by moving any branches or debris from trails.